Dr Muktesh Chander is a very special cop. Unassuming and ever-smiling, this soft-spoken police officer, who also plays the flute, belies all stereotypes. But a few words into a conversation with him and you know the Special Commissioner of Delhi Police (Traffic) means business.

“When you do something out of your routine, you not only feel good, it makes you feel you have done something worthwhile”, says the man who created ‘green corridors’ in North India, thereby facilitating smooth and timely transportation of organs in a non-stop thoroughfare, a mammoth task when you think of the chaotic Delhi traffic and the widespread apathy of people on the road.

As he became involved, he realized that the notification issued by the Transport Department for free passage for Ambulances in the NCT of Delhi had not only long expired but the notification itself was valid only for a certain period. No one had thought of getting it renewed. He not just got the necessary changes made to the notification but also ensured that the revised notification was applicable for all time to come to facilitate ease in implementation.

“My passion towards the cause of organ donation is definitely for altruistic reasons but sparked off by personal reasons. My younger brother underwent a kidney transplant in 1995. My father was the donor. At that time, I was aboard for a UN Peacekeeping Mission and could not be available for my family.” Dr Chander’s eyes fill up as he recollects those days. “Those were the early days of transplantation and very few hospitals were doing transplants. The Act was not in place and only live transplants were taking place in the country.”

“In 2005 my brother’s transplanted kidney failed again. He underwent a second transplant, this time through the generosity of a deceased donor’s family. However, after years of struggle, my brother succumbed to his condition. During this time, I interacted with many doctors and hospitals and better understood the deceased donation scenario in India. Through my personal experience where I was struggling for my dear brother for nearly 10 years, one thing became very clear to me – organ donation has to be promoted and that there is a huge need for organs in our country.”

What do you think are some of the barriers?

“One of the major limitations that we have in this field is that our country’s laws and systems are not in place.” Dr Chander says emphatically. “On one side the system is insensitive and on the other, the laws are not effective. Certain laws can be and should be amended. Now for example, an unnatural death can be due to many reasons. If the Doctor has established the cause of the death then that aspect should not be an impediment to organ donation. The duty of the forensic expert and the police is to determine the cause of death and should work closely with the doctor in-charge. If organ donation is not limiting that investigation, then it should be carried out as soon as possible. Why is that organs should go waste due to this lack of coordination and cooperation?” He asks in an incredulous tone.

How do we sensitise other police personnel who may not have gone through similar personal experiences?

“I have seen the entire cycle and therefore I understand the travails/ struggles of patients waiting for an organ or their families. Those who have not personally gone through this or have not learned anything about this can be sensitized. Role of the police officer is to facilitate organ transplantation and they need to be educated. Organisations like MOHAN Foundation can contribute by training and educating the police personnel from different states.”

He further suggested that the Foundation advocate with the National Police Academy in Hyderabad to include a small module on organ donation within the existing training for the IPS officers undergoing training or those attending refresher courses so that when a situation arises they know what is to be done.

“Our main aim should be to create an environment where no organ goes waste.”

Dr Muktesh Chander has proactively written to all the hospitals in the NCT of Delhi urging them to exercise their right for ‘free passage for ambulances’. He said that the hospitals are not aware of this provision by the Transport department. He has been crusading with the administration of these hospitals to understand the notification under Section 115 of Motor vehicles Act, 1988, which entitles Ambulances to use extreme right lane while attending to emergency calls (as indicated by the use if siren and flashing lights). All other vehicles are duty bound to vacate extreme right lane by moving to the left of the road. Willful failure to do so can lead to prosecution with a minimum fine of Rs 2000 as per provisions of section 194 (I) of Motor vehicle Act, 1988.

He says, “All that is required is for the hospitals to brief their drivers regarding the same and to install a dashboard camera on the front of ambulances for recording the details of vehicles not giving the clear passage. Laws have been made for us but it is up to us to exercise them. These efforts will go a long way in ensuring priority movement of ambulances, not just for critical patients but also for reaching precious organs in time for transplantation.” He has been getting hand delivered, high priority challans/notices delivered to the residences of offenders through the hands of the traffic cops to ensure that the person understands the seriousness of this offence and duly pays the fine.

“I personally feel a law not being implemented is worse than not having one”, he says earnestly.

What do you think needs to be done to boost organ donation in India?

“To bring a change, we would need crusaders – from the public, from the health sector and from the legal system. There is a need of good motivators. Organ Donation is such a cause that people from all the sectors should be sensitized and involved. I also feel that the transplant coordinators must also know whom to contact when and how the necessary coordination be carried out. They should be aware of the notification;they need to be on their toes.”

“I feel that everybody should put themselves in the shoes of those who need an organ to survive. They should ask themselves, how they would react if they or their loved one needed an organ to live. Each and every individual needs to respond positively to the cause of Organ Donation for it to become a movement,” says Dr Chander, recently awarded by the government for his initiative in the creation of the green corridor.

The multi-faceted officer is also earning recognition in other areas. He has carved a niche for himself in Delhi’s world of music as a flautist and has performed on Doordharshan and at several public events. How Dr. Chander finds the time for music in his busy life as a super cop, only he can tell. But he would rather smile and play a few mellifluous notes. 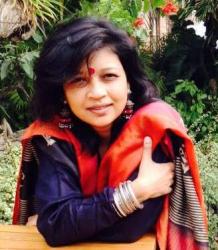 Pallavi has been in the development sector for over 20 years, working for a variety of organizations and causes. She headed SAFRG (South Asian Fund Raising Group) and also worked with the Tamilnad Kidney Research Foundation in Chennai. It is there that she realized the crucial shortage of organs and the urgent need to help people think about this very important cause. Four years ago she started the Delhi-NCR office of MOHAN Foundation, an NGO committed to creating awareness on organ donation. It works closely with various stakeholders, particularly hospitals. She brings to MOHAN Foundation her skills in relationship building and strategic communication, and a deep passion for the cause.