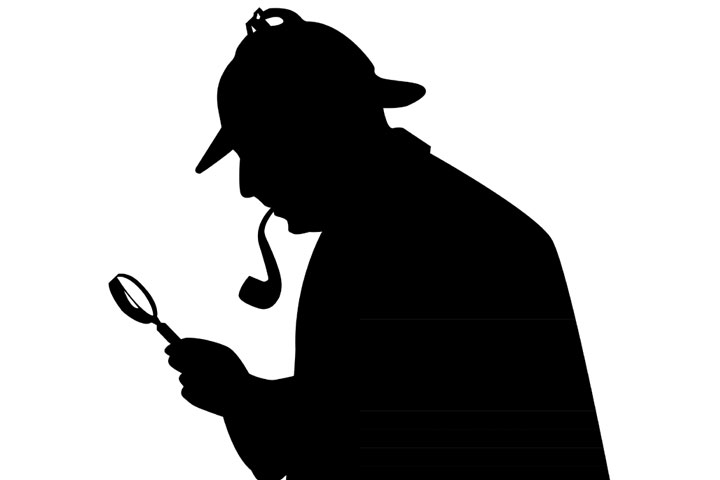 Renal transplantation or kidney transplantation is the best treatment for a patient suffering from end-stage renal disease (ESRD). Compared with dialysis, a transplant leads to a longer and enhanced quality of life, and lesser cost for the patient and the health care system. People can receive kidneys for from Living and Deceased donors.

In India, the number of patients requiring organ transplant is increasing day by day. Unfortunately because few people donate organs after their deaths, deceased donor organ transplantation (DDOT) accounts for less than 4% of kidney transplants in India. This lack of availability of deceased organ donors is the main reason for the increase in living organ donations of Kidneys and Livers in the country.

In living donor transplants, as per the Human Organ Transplantation Act (THOA) and rules made in 2014, only 1st degree relatives, i.e grandparents, parents, siblings, spouse, children and grand children above 18 years of age are allowed to donate. However people may not have family members who are willing or able to donate.

Therefore, any cases we find that some of the donors are paid for donating their organs, and fake documents are made to suit the relationship they plan to present before the transplant team and the Human Organ Transplant Committee (Authorisation Committee/Competent Authority). If left unchecked there is mass commercialization of human organs, a full blown racket working out there, with all its structures and networks in place. This then reinforces the need for a meticulous assessment of each case that is brought up for a living donor transplant.

Below are some of the interesting case studies of fraud and deception in organ transplants, and how they were detected. Following that are steps that Transplant Coordinators can use to ensure that it doesn’t happen in their hospitals.

Case Studies involving forged documents and how they were detected

Mrs. X came to the OPD with Chronic Kidney disease with Mr. X as donor. Both of them were accompanied by three men, out of which one they were claiming to be their brother-in-law and the others as Mr. X’s friends. During the interrogative session, Mrs. X said that as she theirs was a love marriage, none of the family members were in good terms with them.

In the meanwhile till the surgery could be fixed, Mrs. X was advised to undergo dialysis in the transplant centre itself. They were also asked to produce documents such as the voter ID card, Marriage certificate, Ration card and Bank account passbook for the joint account they claimed to have. During the verification, the transplant coordinator had doubts on the marriage certificate and the voter ID card of the donor, so the coordinator asked them to produce their marriage photographs and old family photographs.

Here the transplant coordinator successfully prevented a paid donation as it was proved that the man accompanying Mrs. X for dialysis was her real husband and they had three kids. The ‘fake’ husband was a paid donor.

Ram along with his father Pratab and stepmother Laxmi came to the hospital for the renal transplant of Ram. Laxmi was the donor. The outfit and body language of the stepmother was pointing towards the fact that she could be a paid donor. With that suspicion an extensive with Ram, Pratab and Laxmi was done by the transplant coordinator. Laxmi was not able to answer any of the questions which were asked about her husband, siblings or parents. The transplant coordinator verified the details in the documents based on the history they had provided. It was found that there was a mismatch between the date of issuance of the Laxmi’s ‘Aadhar’ card and the date of marriage. The Aadhar card clearly mentioned the name of Laxmi’s husband and was issued a year before the date of marriage as recorded under the marriage certificate.

When this was asked, Pratab replied that Laxmi does not have any relatives and hence the ‘Aadhar’ card was made with those details. To prove the relationship further, the transplant coordinator asked for the family photographs, which were immediately shown. The father’s head appeared larger in size when compared to his body and this proved that the photograph was edited. Organ trading was prevented once again by an alert Transplant Coordinator.

Case 3 – Faking A Relationship
Ms. A, an international patient approached the hospital for a renal transplant with her cousin brother as donor (mother’s sister’s son). The husband and the facilitator (a person who brings and guides an international patient) were accompanying the patient for the first visit to the hospital to meet the doctor. It was informed that the donor was resting in the guest house. So the doctor started the medical workup of the patient and asked the family to bring the donor to start the process. The facilitator and the donor came to the hospital separately saying that the patient is tired and taking rest in the guest house.

The Transplant Coordinator asked for the legal documents and interviewed the donor and the patient separately. The husband of the patient had the same blood group, but he had given some lame excuse for not donating to his wife. The patient was carrying a HLA report which reported a 100% match with the donor. The HLA report created a suspicion in the mind of the transplant coordinator for the fact that rarely does an HLA report match 100% with a cousin. The donor and the patient were answering questions confidently and giving similar answers. The documents were true according to their statement. The documents which they provided were looking original and the Embassy had also attested the documents.

This seemed to be a foolproof case – all documents were produced and none of them seemed fake (or at least there was no way to verify the veracity of the documents in India), HLA showed a 100% match and their answers to all questions were same. The only way to prove the relationship was through a DNA test. The DNA results proved that the claimed relationship of kinship was false.

It was interesting to note that as soon as the DNA report was shared, the patient and her husband tried to wriggle out of the situation by saying that the donor was the son of the step-sister of the patient’s mother. And moreover, they claimed that the donor’s wife was pregnant and the donor had to go back to his native country.

On further questioning, Mr. K started shouting at the transplant coordinator stating that he was a police officer and that he can produce whatever documents that maybe required. They had to be forcibly removed from the hospital. Finally, the patient underwent the transplant surgery with his daughter as the donor.

As Sir Arthur Conan Doyle quoted in his famous detective series, “My name is Sherlock Holmes, it is my business to know what other people do not know, a transplant coordinator will need to know all minute details to do the job diligently and honestly.

Ignoring the verification of documents can lead to legal complications for the transplant team, the hospital authorities and the committee members. In view of the above, each centre conducting organ transplants will have to set-up a clear process protocol for medical and legal work-up.

In India, since the law is very stringent and donors are not easily available, we need to bring in standard mechanisms to monitor and control the whole process of organ transplantation by appointing qualified and well trained transplant coordinators.

Note: All names given in the cases have been disguised and different names mentioned, to protect their identity.

The assessment starts from the time the donor and recipient is introduced to the transplant coordinator. Here, the transplant coordinator assesses them by their appearance and body language. Occasionally in a case where organ trading may be happening, the suspicion starts at this point. After the initial introduction and pleasantries, it is ideal to interview the donor and recipient separately before calling them together for a joint meeting.

These separate sessions could cover the following points: –

a. Understanding the educational background of the donor and the recipient
b. A thorough interrogation in a casual and friendly manner around the following areas could be helpful: –

c. Income details of the recipient, donor and other family members
d. Is there affection and attachment between the family members?
e. The reason for donation and the motive behind the decision to be assessed before taking them further for any psychological evaluation.

The transplant coordinator has to take special care to corroborate and cross verify the details as given by the donor, the recipient and other family members, to judge the accuracy of the data as provided by the various sources. This will then give adequate support for understanding whether the donation is between legally valid pairs (donor-recipient), or it is a commercial deal.

After the session, documents should be verified that include:-
a. Voter ID card
b. Aadhar Card
c. Ration card
d. Marriage certificate if applicable
e. PAN card
f. Passport
g. Driving License
h. Any other

If the transplant coordinator is not satisfied with the documents provided, then the patient and the donor are asked to produce more details.

c. Bank statements – in case there is a joint account in the name of the husband and wife, then the date of opening the account, transactions done etc. For the other than near relative (as given in Human Organ Transplantation Act (THOA) and rules made in 2014 there under), the transplant coordinator verifies the details of last three years.

e. Verification letter from the MLA/ Panchayat Sarpanch/ Tehsildar/municipal councilor to prove the relationship in depth especially in case of spousal donation.

The transplant coordinator correlates the details mentioned in the documents and those provided at the time of interviews. The scrutiny doesn’t end with the first visit, it is a continuous process. If the transplant coordinator has any suspicion after the verification of the documents, the transplant team is informed about the findings and recommends for a DNA test from a NABL accredited Lab. After the thorough verification shows that the details are correct, the case is referred for medical and the legal workup.

The approval from the Authorisation committee/ Competent Authority is essential before proceeding with an organ transplant.

Flow chart on how to verify documents 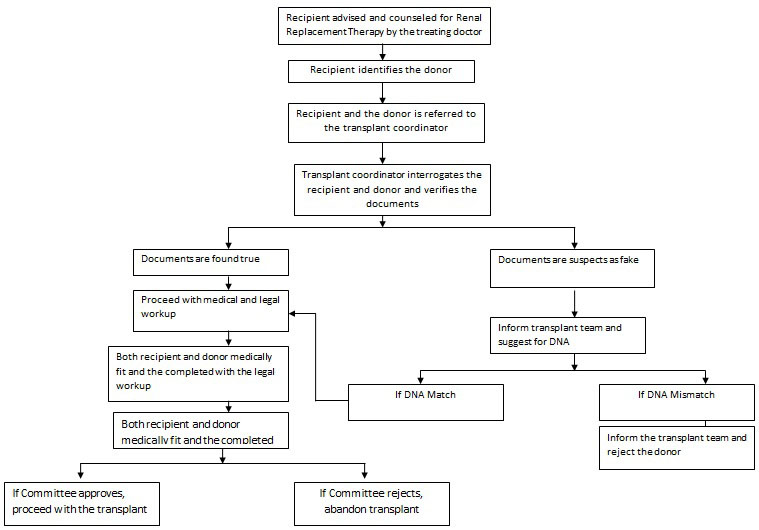 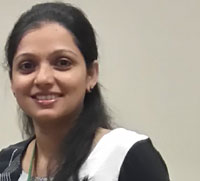 Trilly Rachel Mathew is a Postgraduate in Social Work from Rajagiri School of Social Sciences, Cochin, Kerala. She has over a decade of experience in managing Human Organ transplants working for Apollo Hospitals, Bangalore and Medanta – The Medicity, Gurgaon. She is a regular speaker at various national/international conferences on organ transplants at various forums like the Indian Society of Organ Transplantation, NOTTO (National Organ & Tissue Transplant Organisation) & MOHAN Foundation. In the past she has also been associated with the Tobacco Cessation programme of WHO (World Health Organization) at NIMHANS, Bangalore. Currently she manages and administers the organ transplant program at the Fortis Memorial Research Institute, Gurgaon, Haryana.