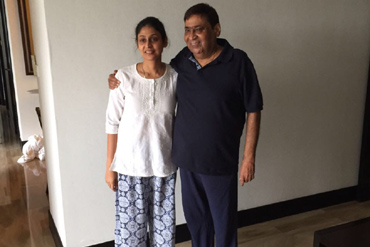 Hi, I’ll introduce myself first. I’m Mamta Agarwal, and I am 38years old, I have a husband named Anuj and two children, a 14-year-old girl named Nandani and a 12-year-old boy named Krishna. I also have a brother, named Mohit, who’s a year older than me. 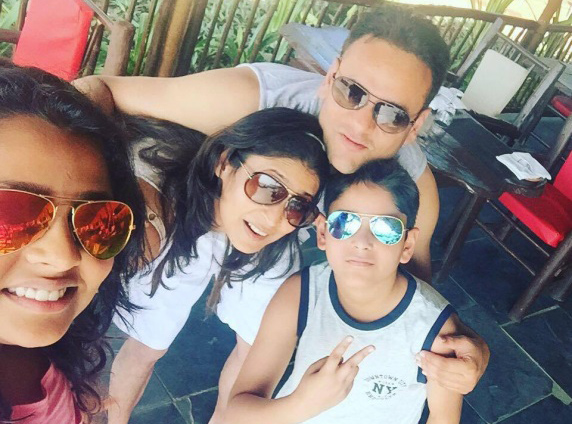 For the previous eight years, my father was going through kidney problems because of his unfit lifestyle and diabetic condition. He was being treated in Singapore, and eventually we were told that he may need a kidney donor as his kidneys were failing. My brother was taking care of everything from the regular visits to Singapore to all the procedures and he managing everything.

My brother eventually found a kidney donor for my father. Even so, after returning home from the temple one day, I somehow felt the need to get my tests done (for being able to donate my kidney to my father). My husband agreed at once and we got them done in Delhi within that week. I sent all the reports with my mother, to show to the doctor in Singapore. My brother and mother didn’t want me to do to be the donor, and I was told to stay out of it. But I was adamant on helping my father. So, after three months they went to Singapore for a general checkup and were told that both his kidneys were failing and that he would need the transplant within the next month.

We all panicked, and when my brother showed the reports of the kidney donor he had found, the doctor rejected them. Then, in desperation, my mother showed him my reports. He approved them, and I was called to Singapore immediately. I reached Singapore and was devastated to see my father, who was always so active in a terrible state. The doctor did some blood tests for me, in fact, it was a total of around fifty different tests, and I cleared them all.

Some of the tests were not physical, they were psychological. I felt that the toughest one was the one done by the ethics committee, where they ask the donor questions about their family, life and mental state, to check whether the donor is being forced to donate their kidney, or whether they genuinely want to donate their kidney by their own free will. By God’s grace, I cleared that ‘grilling’ successfully.

Then, it was the 26th of September, 2016. The day of the operation. As I was going towards the operation theatre, I noticed that all my friends and family members were crying, and I was wondering why, because I was not scared at all. First, it was my surgery, and then it was my father’s.

So after my surgery, I opened my eyes and found myself to be in the High-density unit (HDU) and that hit me pretty hard. I had a huge 17-inch-long cut starting from my stomach going all the way down to my back. I tried to move but I felt like I was paralysed. I had over thirty wires attached all over my face and body. The reality finally hit me and saying I was devastated, or in pain would be an understatement. From what I remember, that night in the HDU, my blood pressure was drastically decreasing, and my only thought was, that I wouldn’t survive that night. Although, the next morning I was awoken by a bunch of joyful doctors and nurses who told me that the transplant was successful, as that my father had urinated. I had mixed feelings and that time I myself was going through so much that I didn’t feel any joy.

Then the journey really began. My kids went through a very bad time as I was not there with them and they were in Delhi with my sister in law Shreya Jain. My kids had a very tough time in school too. Their grades went down and they went a little blank in school. My daughter who was 14 started goggling ‘percentage of deaths after Kidney donation’ and just did not share anything with us. When I saw her changed behaviour I went to talk to a Psychologist in school and she told me that she had seen Nandani’s searches and that it was normal for her to behave like this.

My son put up a strong face in front of me, but a friend told me that on the day of the surgery he was hiding in one corner and really crying. I thank god for my sister in law who left everything and devoted her full time to take care of my children and thankfully, they soon forgot all about it. For about six months, I was in a terrible state of pain, both physically and mentally. After the surgery, my body went through a lot of hormonal changes and I got a severe back spasm and scar tissue. I had to get physiotherapy done every day. I fell into a depression.

I also realised who my REAL friends and family members were, because it made me closer to some unexpected people, and also drove a lot of people out of my life. I was told by a friend, that any transplant is a social disease and it doesn’t only affect the patient, but also impacts the whole family mentally and emotionally! Our whole family heard a lot of things about why am I donating? Why can’t we hire a donor? Why can’t my brother donate? Did my in-laws give permission to donate my kidney? Will I be able to lead a normal life? And the questions were unending!!

My brother left his work for three months to handle it all and stood by me and my father. My sister in-law played a major role by travelling back and forth from Singapore to Delhi, at least four to five times, but most importantly taking care of my kids during the surgery in Delhi. I cannot even imagine what my mother went through, as her husband was in one room and her daughter in the next. My husband broke all the norms by standing with my decision. Seeing his wife going through a procedure, he stood by me like a rock and left his work to take care of me. It was so difficult for him seeing me go through so much, and I cannot even imagine the fear he must’ve had because I was risking my life for my father. But Anuj accepted all of my decisions and was the most supportive and caring partner one could’ve asked for.

It was one of the toughest experiences of our lives, but it also taught us numerous lessons.
During my recovery, my doctor explained to me that I should promote organ donation so that no one would have to go through what we did. At that time I didn’t pay much importance to the thought. But over the course of one year seeing my father so fit and healthy, I decided that I will take up this social cause strongly and spread message of organ donation, beginning with my family members and friends who saw us going through the whole thing. If we come together and register for organ donation after our deaths, we can slowly save lives and change the world without putting the lives of living donors at risk. I feel like if I inspire even one person to sign up for organ donation, my job is done. I hope I’ve inspired some of you. 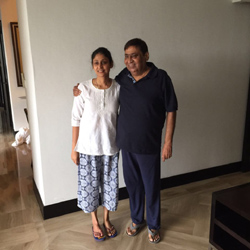 I was awoken by doctors who told me that the transplant was successful, and my father was fine after I donated a kidney to him. I had mixed feelings. I had a huge 17-inch-long cut and felt like I was paralysed. There were thirty wires attached all over my face and body. I was later told by a “friend”, that any transplant is a social disease. I want to promote organ donation so that no one would have to go through what we did.